Among the many disturbing aspects of cancer is the fact that single cells can detach from a tumor and roam the bloodstream, perhaps settling in a place where a new tumor forms. And, just like that, the disease has an opening to spread or recur. 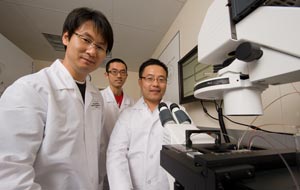 In his busy laboratory on the third floor of the Sue and Bill Gross Stem Cell Research Center, Weian Zhao, assistant professor of pharmaceutical sciences, holds a miniaturized device in the palm of his hand that may someday outfox those tiny cancer cells as they make a run to new destinations in the human body. Zhao’s technology, dubbed droplet microfluidics, is designed to detect solitary cancer cells in a blood sample – information that could help doctors diagnose primary tumors earlier and assist them in monitoring patient treatment and prognosis.

The technology, developed with the help of Calit2’s BiON clean room facilities and staff, uses DNA-based sensors to bind to a wide range of cancer biomarkers, including cancer cells found in whole blood.

Zhao was well-prepped for the project when he arrived at UC Irvine. He studied chemistry at Shandong University in China before earning his doctorate in chemistry at McMaster University in Canada. As a postdoctoral fellow at Harvard Medical School, he worked on micro-and nano-engineered tools to support cancer diagnostics.

But Zhao is hot on the trail of these runaway cancer cells.

“People argue that if you can detect the cancer early enough, even before a person feels any symptoms, the chances that you can cure the cancer are much higher,” says Zhao, a perpetually cheerful man who exudes enthusiasm about his work.

His droplet microfluidics device aims to detect those circulating tumor cells in order to diagnose patients earlier and to help monitor them after treatment to ensure there are no residual tumor cells that could lead to a relapse. That’s a huge challenge, he says.

“These circulating tumor cells are rare,” Zhao explains. “We’re talking about just a few tumor cells in every microliter of whole blood. That’s why there are few current technologies that robustly detect that.”

His sensor makes use of a library of short pieces of DNA that can selectively bind to almost any type of molecule, such as cancer biomarkers and cells that circulate in whole blood. Fluorescent dyes can be attached to the DNA, and that package reports the activity of a cancer cell.

Zhao and his collaborators have created two channels in their microfluidic device: one carries the blood sample and the other carries the sensor solution. The two solutions are mixed and an oil-based solution is applied to break the merged stream into millions of tiny droplets 10 to 100 microns in size. Breaking the stream into droplets is the key step, because rare tumor cells are encapsulated where they can be recognized. It’s as if a police searchlight settled its bright beam on a group of 10 people standing in a crowd of 1 million. Among those 10 people, the police can now spot the guy on their most-wanted list. 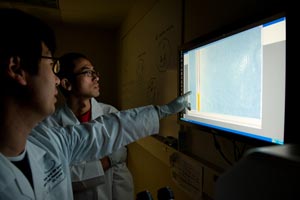 A high-speed, high-throughput processor is able to see which droplet contains a tumor cell. The encapsulated sensors allow researchers to detect markers inside the cell and on the cell membrane. Zhao and his colleagues were the first researchers to show, via the droplet technology, that molecular biomarkers could also be detected in the extracellular space.

“Everything is super concentrated, so you can really see what’s in the cell,” Zhao says.

By using an enormous library of DNA, the process can also overcome the problem of having to identify specific biomarkers that might be involved for a particular tumor. Once the sensors encounter the targeted cancer cells, the fluorescent dye lights up to make the droplet visible.

“We fish out the molecules that are specific to cancer,” he explains, “so we can avoid any of the genome sequencing, the proteomics approach, which takes so much money and time to develop.”

“Screening these droplets in a high-throughout manner using our cancer cells-specific sensor will easily find that droplet within a few hours,” he notes. The next major challenge, Kang adds, is to develop a smaller and lower-cost microscope system to pick up the fluorescent signal.

Besides cancer, droplet microfluidics could be used to detect bacteria and viruses in the blood. Zhao is collaborating with Ellena M. Peterson, associate director of medical microbiology in the School of Medicine, on a project to detect bacteria in blood. If successful, such technology could allow doctors to diagnose bacterial infections like pneumonia or septicemia in minutes rather than 24 hours.

“Technology that will allow us to detect very low amounts of pathogens in a rapid manner has great promise in diagnostics,” Peterson says. “We don’t have anything like that in medicine right now.”

Zhao, who last year was named to the MIT Technology Review’s list of “35 Innovators Under 35,” has many collaborators interested in droplet microfluidics, including physicians at UCI Medical Center who plan to test the concept in a clinical trial.

“Dr. Zhao is vibrant, energetic and a go-getter,” Peterson notes. “That’s the type of person you want to work with.”

Zhao credits strong support from UCI in the form of state-of-the-art facilities, strong mentorship and a collaborative spirit for his success.

“The research here is so strong,” he says. “For nano and micro-fabrication, Calit2’s BiON facility is just one of the best. I so appreciate their help and the facility they offer. Otherwise none of this would be possible.”